If you already have subscriptions please login 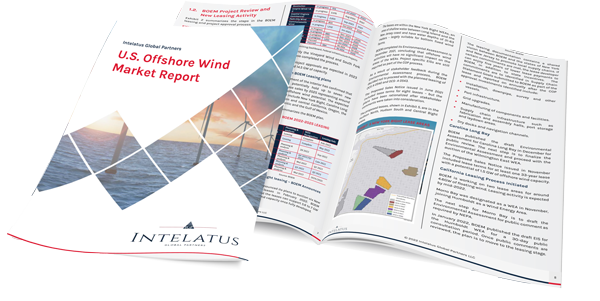 January brings with it the expectation that the first commercial wind farm in federal waters will start generating power by year end, the promise that permitting for close to 5 GW of projects will be finalized within the year and that federal agencies will auction leases containing more than 15 GW in the Gulf of Mexico, in the Central Atlantic and offshore Oregon by the end of the year.

However, the strong foundations for growth in the East Coast bottom-fixed segment have been challenged by supply chain constraints and cost inflation. Vineyard Wind, Park City Wind, Commonwealth Wind, Mayflower and the Commercial Coastal Virginia Offshore Wind project have all reported significantly higher construction costs than originally planned as well as supply chain challenges. Some developers, such as Dominion, have secured cost recovery commitments, whereas others, such as Avengrid are being held to their original cost commitments, despite seeking revised or even cancelled project agreements.

Despite these inflationary challenges, the drive to grow the U.S. offshore wind segment into a leading offshore wind market continues. The foundations are solidifying and support the deployment of 30 GW of offshore wind by 2030 and 110 GW by 2050.

Our forecast accounts for close to 70 projects that will install around 78 GW of capacity in this and the next decade and a total 110 GW by 2050. The 78 GW forecast capacity will require capital expenditure amounting to around $240 billion to bring onstream, a recurring annual operations and maintenance spend of around $8 billion once delivered, and close to $35 billion of decommissioning expenditure at the end of commercial operations:

12 OCS developments containing 15 projects with a potential of close to 20 GW are currently undergoing federal permitting review to create the foundation of meeting the 30 GW by 2030 goal. 17.5 GW of project capacity has secured offtake commitments from states. Longer term, deployment goals by states already amount to over 96 GW, which is beginning to make the White House goal of 110 GW by 2050 look somewhat conservative.